POWERFUL BUT NOT PRETENTIOUS.

The structure of the internal spaces is as secure and protective as the external form is open and inviting. The architect Annette Axthelm has turned individuality and personality into comfort and homeliness. The clinker brick slip facade remains in keeping with the historical town image of Lüneburg and is integrated into the environment – but is still individual.

Salt made the Hanseatic town of Lüneburg wealthy – and its buildings famous. The well preserved gothic brick architecture of Lüneburg‘s old town is known internationally as a Hanseatic cultural treasure. However, the prestige building of Lüneburg University, designed by US star architect Daniel Libeskind – without a clinker facade – is now known as a prime example of bad planning and is mentioned even beyond state borders in the same breath as scandal projects such as the Elbe Philharmonic Hall in Hamburg and Berlin Airport. In this context, the “Wohnen am Wasserturm” project is not particularly spectacular. Although it has also created something of a stir in advance. This is because, in order for the residential project to go ahead, a dilapidated function hall that was contaminated with asbestos had to make way.

Some Lüneburg residents would have preferred to save the hall and not only make it into Europe‘s highest free climbing facility, but also a visitor attraction and PR magnet. The Potsdam architecture firm Axthelm & Rolvien was awarded the contract for the residential project.

Axthelm and Rolvien have made a name for themselves, particularly in Berlin, with imposing buildings in prominent locations. Yet Annette Axthelm is one of the understated greats of the architecture scene. She prefers to step behind her architecture and let the buildings speak for themselves. Her designs are works of art, but also fulfil the highest demands regarding functionality and comfort. Her buildings communicate with their environment. Her architecture is full of respect for the architectonic context in which she is planning. And a context that demanded attention was the harmoniousyet self-aware integration of the facade located in the immediate vicinity of a Lüneburg landmark, the traditional clay brick water tower. ZEITLOS eisenrost in DF was chosen. 1,770 m².

Because clinker has proven itself in Lüneburg for centuries, as demonstrated when even more came to light during excavations for the new underground car park for the residential facility. Excavation technicians found some 200 year old bullets in the ground, which is so rich in history. Town archaeologists attributed them to fighting during the Napoleonic Wars in 1813. But these war bullets highlight a very obvious feature of clinker – durability and protection. Ceramic fragments from the clinker wall that fortified the town at the time were found with the bullets. Some bullets smashed upon impact. A richly historical example of form and function!

Flooded with light – living in harmony with nature. Bright, airy and light. A touch of modernity, clear structure, natural warmth.

Out on its own and yet at the centre of the action: The apartments stylishly flank the central courtyard like a protective hedgerow. Trees and benches adorn the path to the front door. The green inner courtyard is only accessible to Wohnpark am Wasserturm residents. A private recreational and meeting zone among neighbours – right in the town centre. A space for wellbeing between Ilmenau and a pedestrian zone. 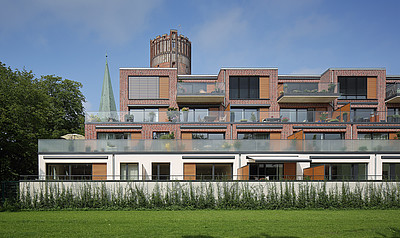 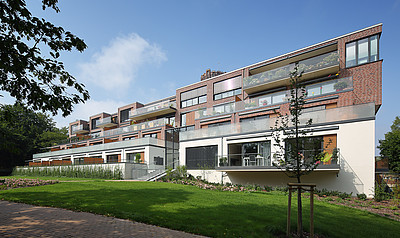 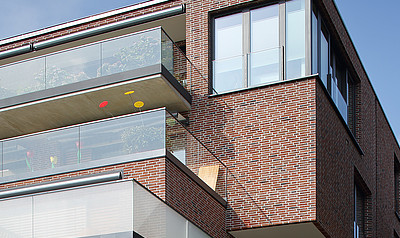 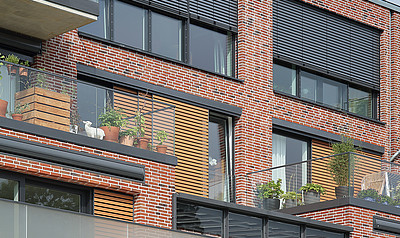 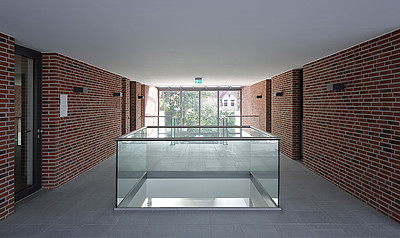 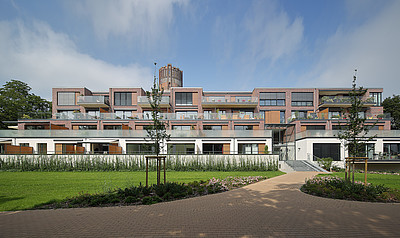